How Long Has May Got Left in Downing Street?

A couple of weeks ago, the Independent’s John Rentoul tweeted that he thought that of the two main Party leaders, May would last longer than Corbyn. Rather surprisingly, I can see circumstances where this could happen. 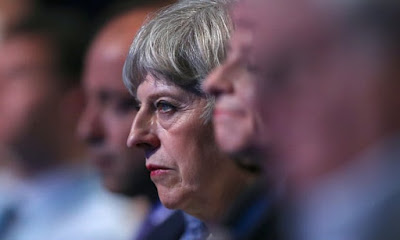 If this parliament lasts for the full term, I can see some sort of succession planning kick in, in around three years time. Labour would therefore be fighting the next election with a younger, more telegenic and nimble footed prospective prime minister that is also Corbyn minded (Rayner & Thornberry being the two most likely successors at this moment). On the other hand the Tories still have May, and that is their problem.

When Cameron resigned and May took over, my thought was that May would be an upgrade on Cameron. She was, I’d reasoned, someone who would not take unnecessary risks and would understand the need for a return to consensus politics.  In short, she was an upgrade on Cameron. Instead May’s reputation disappeared over the course of a badly run and badly argued election campaign. In any other times, May would have been forced to resign as PM and a successor would have been installed, someone able to command the confidence of the house. What last year’s leadership election showed was that the list of leadership hopefuls looked like a rather threadbare list, it is possibly for this reason that May has not been forced out.

Instead of forcing out May, the Tories are I think waiting for someone to emerge who they feel can adequately lead the party and appeal to the country. Some of those talked of are either back benchers (Rees-Mogg junior) or junior ministers (Raab), it is surprising how much of the so called big beasts are being ignored and that “jumping a generation” is now back in vogue, given the last time the Tories jumped a generation we got Cameron. The exception to looking at younger leaders being Boris ‘Boom Boom’ Johnston, but then again he has been somewhat on manoeuvres.

It would of course be all well and good if May recognised the new diminished position that she and her party find themselves in. Instead, May still believes the ‘Strong & Stable’ mantra which made her a figure of fun in the spring. She and her party still hanker after being the party to provide “the firm smack of government” as they did in the 80’s. When they had 100 odd seat majorities and had the political space to do so. Indeed the Thatcher that the Tories hanker after only emerged between the Falklands and the 1983 Election – the start of her imperial phase. She was a more cautious PM when she ‘only’ had a majority of 44, even if her radical monetarist policies were still being implemented.

Perceived wisdom in the aftermath of the election was that May would see out the EU divorce proceedings before stepping aside. However, against the spirit of her speech to her backbenchers the week after the election, May has since said repeatedly that she intends to serve a full term and fight the next election, much to the horror of the Tory party strategists and some in her party. This brings us to the question posed in the title and the importance of this week.

May’s position is that she is essentially living month to month as PM, she is as close to borrowed time as she can possibly get. If she has a good conference and gives a good speech on Wednesday then it gives her some space to carry on. Some. And certainly not a licence to act as if five years is a certainty (which it most certainly is not). However, politically, she needs to be contrite and show that she is adapting to the changed political landscape. She also needs to deal with Boris, but a politically smart operator would have dealt with him already and not given him carte blanche to do what he pleased as he pleased. Of course, it’s possible that Boris’ aim is to be sacked and therefore to avoid being blamed for bringing down May. “He who wields the knife never becomes leader” and all that. “Friends of Boris” (if he has any after his various affairs and is not some made up pseudonym for Boris) would be failing in their duty to let Boris know that maybe it’s too late for that and that any rugby balls that pop out of the scrum certainly won’t be falling at his feet.

If the week goes badly for May, she’ll be gone by Christmas. Simple as. This is the party which took 24 days to oust its most successful leader of the 20th Century and PM for 11 years. Once they turn against May, she won’t be around for long. If she is gone within the next couple of months, I’d expect David Davis to be the successful stop Boris candidate, and successful in stopping Boris. This is the new reality for the Tories, the fragility of May’s position. Her cold curtness surprisingly makes you pine for Cameron’s ‘sunlit upland’s’ guff.

The new reality for May is that she is the PM in the most precarious position since James Callaghan in the late 70’s. The big difference is that Callaghan only had to worry about Commons votes (his party only became bitterly divided after election defeat). May also has to navigate a party still angry at throwing away a 12 seat majority, unconvinced of her performance as leader but not convinced of the alternatives. It is remarkable that the party are still minded to leave May in her position. This week will be the first major test of that balance since the Election. By the end of this week we will be in a better position to answer the question posed in the title of this blog.
Posted by Allan at 13:00 No comments: