The Suicide Note For The Yes Movement?


One of the ongoing debates in Scottish politics is what happened to the 476,867 voters who voted SNP two years ago and didn’t on June 8th, with consequences feeding into the narrative of why.

YouGov’s post election poll found it likely that those voters simply did not vote.  The competing argument comes from Michael Ashcroft’s polling, which found that 12% of the SNP’s vote in 2015 went to Labour (with half that voting Tory this time).  You pays your money and you take your choice, so to speak.

We had seen this argument before, with the blogger James Kelly aggressively promoting the “both votes SNP” argument during last year’s Holyrood elections.  His argument was that only both votes would deliver a second SNP majority government – and aggressively by attempting to run both the Scottish Greens and RISE (the post referendum re-branded Scottish Scocialists and Radical Independence affiliates) off the road – and therefore would mean a second Independence referendum being on the table when conditions were favourable.  Unsurprisingly RISE failed to gain traction among voters (new party and a distinctly underwhelming campaign being the key reasons), however the Scottish Greens gained list votes.  As for the both votes strategy it was a success...  except it wasn’t. As the SNP gathered their biggest votes ever for FPTP and beat Labour’s record for list votes their success in the FPTP seats worked against them in the list seats while the thing which lost them the cherished majority was, well SNP losses in North East Fife, Edinburgh Western and Edinburgh Central which did for them.

So thank you RISE’s figurehead Kat Boyd (above) for reigniting this argument and for eliciting such a response that I suspect that the Yes Movement is in a parlous place if such ideological thinking is mainstream among the one eyed Yessers.  Oh, and thank you as well for having the balls to speak the truth too.

Boyd popped up in a short film broadcast on the last pre-holiday Sunday Politics, Graham Stuart’s film looked at the SNP’s result and drew parallels with their response to the 2005 result (which saw them fall behind the Lib Dems).  Boyd called for the SNP to be more radical whilst defending her decision to vote Labour (and for Corbyn) in June.  This admission upset the one eyed Yessers and confirmed Boyd and her party as ‘pretend’ nationalists.  The fact that the SNP’s own policy platform has undoubtedly moved to the right since the 2014 referendum seems to have bypassed those Yessers.  That move in itself validates Boyd’s decision to vote for Corbyn.

Boyd’s appearance provoked obviously a reaction from the one eyed Yessers and also an astonishing response from the aforementioned Mister Kelly of the Scotland Goes Pop blog.  Astonishing, because the post to all intents and purposes lays out a manifesto for an ideologically pure pro-Independence drive for votes taking Independence and independence only as the basis for your vote.  There is no concession to whether you agree with the SNP on, say, local authority funding, education, taxation or relations with the EU, you vote SNP for independence...  or you are the enemy for voting for a ‘Yoon’ party.

Kelly’s plot was well and truly lost right at the start when he said that RISE were now vulnerable, or as he put it “This episode may also be helpful to the SNP on the list vote at the next Holyrood election, because RISE (or whatever succeeds RISE) will find it even harder to pitch for 'pro-independence tactical votes' now that their commitment to independence has been shown to be rather superficial.”

Quite how this will assist an SNP which looks more and more Mac-New Labouresque as the days go by, and look in some trouble is beyond me.  The Scottish Greens are capable of taking votes from the SNP should they continue to drift rightwards, and this really should be RISE’s tactic too.  However, the point missed by Kelly is that RISE were canvassing for votes from the Radical Independence wing of the Independence constituency, votes that would only go to the SNP tactically anyway (in the same way that left of centre votes only went to the SNP because of the Progress tendency within Scottish Labour).  If people like Kelly are intent in destroying parties offering different policies from the SNP but on the same page as the SNP regarding Independence, then it does not bode well for the Yes coalition does it, never mind Indyref 2.

Not that the signs are encouraging anyway, judging by the First Ministers bad reading of the post EU referendum landscape.  However that desire for a ‘pure’ Independence movement is causing strains which mean that logically the next pro-Independence campaign must be a more ‘loose’ affair.  Certainly not the SNP led & managed affair that was in the offing.  There are real divisions there, and not just about policy.  Last week’s question de jour was should the pro-Independence coalition distance themselves from an English based homophobe and his chimp like followers.

The cult of Stuart Campbell raised it’s head once again last week as he took the leader of Scottish Labour, Kezia Dugdale, to court.  Dugdale had called Campbell out for being Homophobic over tweets about the Tory MSP (and son of the Scottish Secretary) Oliver Mundell during First Ministers questions.  That Campbell has form for being misogynistic and homophobic seems to have bypassed the chimps in their rush to attempt to defend the indefensible.  That there is still a debate over Campbell and his little man Trump tweets seems bizarre. Even more bizarre is that the SNP have not sufficiently distanced themselves or condemned Campbell, in spite of the damage that he and his followers are doing to the Independence cause.  The Common Space’s Angela Haggerty compares this episode to the fate of Tommy Sheridan, though personally I think the parallels are more with the ex-Tory cabinet minister Jonathan Aitken.  Like Aitken, Campbell is suing to salve his bruised ego clear his name (though Campbell is only suing Dugdale, Aitken pursued both ITV & The Guardian).  I don’t think there’s been a cringe worthy speech about using a “trusty sword of truth and the shield of British fair play” to cut out a cancer, but we can only hope..  sorry, what's that Skippy, he has said he's fighting against the "lies and smears from Unionist politicians".  Well that is Aitken-esque levels of chutzpah.  As for the other parallels...  we can but hope.

The counter argument – that he is not a member of the SNP - is stuff of poppycock.  SNP politicians regularly re-tweet and favourite his tweets and promote his posts.  In this sense, Campbell/Wings is the SNP’s own creation and his ‘success’ is the reason we have been lumbered with a second ‘personality’ providing off colour rants on social media.  For all of the outrage about ‘Brian Spanner’, he is essentially Wings for a pro-Union audience – you simply cannot criticise one without criticising the other. Dapper Laughs is almost funny by comparison.

Alongside passing so called “peak Nat”, we are now seeing that the SNP & the pro-Independence supporters have now lost control of the narrative.  Scotland has not (so far) turned to Independence in droves whilst we are now seeing more critical evidence of the SNP’s failure to get a proper grip on the task of government during their second term.  We are now also seeing the breakdown of the ‘Yes’ coalition, driven by a drive for an ideologically pure pro-Independence support to rally, unquestionably, behind the SNP.  The problem with that is that it flies in the face of the original impulse that differences were put aside in an attempt to achieve the bigger goal.  Now differences are magnified and people who deviate from the central message are chastised for doing so and ‘hurting’ the indy message.  Then again, that’s the problem with us and them.  If ‘us’ develops unlikable tendencies then criticism (however valid) will look to the hard liners as support for them.

For a party and a movement who’s aims are not the majority view in the country, both the SNP and the one eyed Yessers are failing in changing that state of affairs.  They have ostracized people who voted to leave the EU – dubbing them Tories (even if there is a perfectly sane & sensible left wing case against the EU).  They are ostracizing left wingers and people who are attracted to Corbyn’s Labour party whilst pandering to the Homophobic whims of their own little man Trump.  Even if laughably they are planning to fly in the face of those actions and present a progressive centre left version of Independence.  After the past couple of weeks, good luck with that.  If this is the moment the Yes coalition crashed and burned, then Kelly’s somewhat petulant & self indulgent post on Kat Boyd, alongside Stuart Campbell’s Jonathan Aitken moment, should be seen as it’s suicide note.
Posted by Allan at 16:00 4 comments:

Not To Be This Time


Guest blogpost time again.  This post is from the grand fromage of Paisley.org, general promoter of all things Buddie and candidate in the recent council elections, Brian McGuire.  Here's his story from the inside of that campaign. 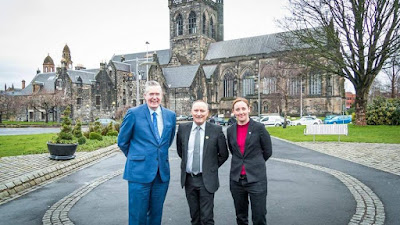 I was a candidate for the 2017 council elections, unfortunately, due to the way the name (alphabetical) and 3 of our same party on the ballot sheet I knew from the start it would be a struggle but in the early days I was positive.  I stood for election because I have the best interests of my area at heart.

Campaigning is done in what is called VMS (Voter Management Strategy) i.e the person who is the councillor gets less of the ward to canvass and leaflet the person whos name alphabetically suits gets around the same sometimes more sometimes less, on this occasion I was given 57% of houses to canvass, leaflet, newsletter and then send out an election address.


A monumental task considering the thousands of houses I had to deliver to.


The first part is canvassing chapping doors and seeing if they would support you, I had a fantastic response on the doors, which within a week sort of became weird as Nicola Sturgeon spoke about IndyRef2 which got voters who were voting a bit mixed up with national and local issues, once local issues were explained the public were back on track.


I never came across any person who was rude and actually knew tons of people who in the constituency knew me through the work I already do.. So the feeling was high.


Then Theresa May decided a snap election would take place and the environment of friendliness changed people became disenchanted and fed up of elections, bear in mind all this happened within just a few weeks.  So it was now Unionist against Nationalist, The Prime Minister and her media bandwagon got going and Scotland again was the weaker nation in her and her cabinets eyes, how dare we want to go alone, get back in your place Scotland.

The mainstream media changed people's perceptions and from that point onwards it was a struggle.


The campaign was successful for our group overall but not for myself but I will continue to stick up for the town via my paisley.org.k website.


I wont be put off doing it in the future but they have to come up with a better way of randomising names, the best people for the job are being beaten if your surname ends with an alphabetically correct name. McGuire was near the bottom of the list and I could hardly see myself let alone anyone else.


I wish the new council administration all the very best and I am sure they will have the area at heart.
Posted by Allan at 12:00 No comments: