The constant talking down of St Mirren by BBC Scotland football pundits, “the recovery”, Cheryl Cole/Tweedy, the popularity of Simon Cowell.  Hell, the sexual attractiveness of said Mr Cowell.  A few things that I just don’t understand.  Alongside which can be placed the apparent popularity of UKIP, this is even more the case after flicking through their election leaflet. 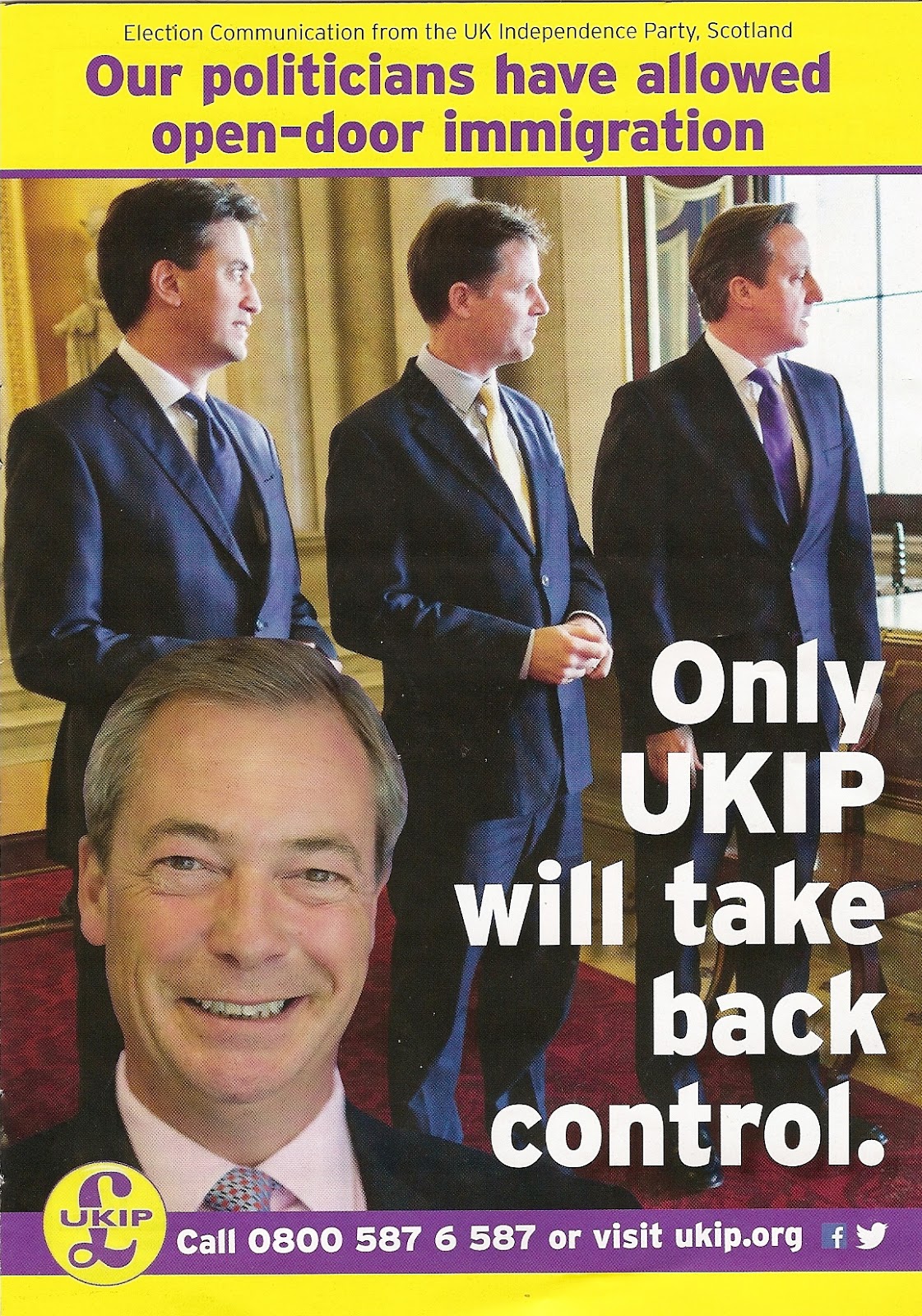 The UKIP master plan, if it can be described as that, is to target immigration as the key issue that’s dragging Britain back.  Except that this leaflet is being economical with the truth.  For starters immigration from outwith the EU is not “unlimited” – there is no open door to people coming from countries in Africa, Asia, the Americas or European countries that are not members of the EU.  1950’s man’s main gripe is with the freedom of movement that applies to all EU citizens and wants us to be angry at plumbers, joiners and other manual workers who are not surly, obtuse, S*n reading white van men.

While the banner slogan states “4,000 people a week come to live in Britain from the EU”, the flip side is not put forward by UKIP.  Under freedom of movement, Brits can move abroad and work, and many do so.  In 2012, 154,000 people left the UK to work abroad, an average of 2,962 a week.  Then again if the assumption is that the majority of those people leaving are retirees inspired by the thought of the “a year in Provence” lifestyle, then that doesn’t really help UKIP’s arguments.

The problem though is UKIP’s right front & centre is just attacking the EU, without either providing viable solutions or identifying the real problems with “The European Project”.  Only UKIP will take back control they say, yet they bemoan cheap labour and putting our infrastructure under pressure and…  er…  basic human rights.  Yet these are issues created by their bedfellows at Westminster level, the Conservatives.

If UKIP have firm evidence that companies are employing EU citizens for below minimum wage rates, they should name and shame rather than throw baseless accusations about.  Either that or advocate a proper living wage for workers.  As for UKIP’s line on public services being under pressure, that’ll be the real cost of austerity.  Except that Farage has blamed Greek Austerity on the EU and is nowhere near as critical of the Osborne led austerity (mind you, Osborne was influenced by the former head of the IMF, Lagarde).  Osborne might have been claiming he was acting to placate the markets, but Osborne’s plan is still his and his alone – nothing to do with the ECB or the EU.

The time before last that I blogged about UKIP, I made the point that their message is targeted at a squarely disaffected Tory constituency, which will have concerns with EU regulation, straight bananas and all that.  The UKIP message is to all intents and purposes a middle England message.  This has not changed, with not a peep about the enshrinement of the privatisation of public services within the Lisbon Treaty.  What has changed is their polling, about 15% for Westminster elections and north of 25% for the upcoming European Elections.  But not in Scotland, where in the three Holyrood by-Elections in the last year, they polled below 5% in each one.  Not the performance of “Britain’s most popular party” (© The Independent).

The seeming residency on Question Time, the endless good press, the fear among Westminster’s main parties, it all adds up to a party on the rise, yet they do not have an elected MP at Westminster.  The SNP in the 60’s and 70’s, the SDP in the 80’s or Ashdown’s Lib Dems in the 90’s (pre the Blair landslide) never got this good a run and they had MP’s.

I would understand it if UKIP had a set of radical but popular policies.  They don’t.  All they have is blame the migrants for all our ills.  Maybe it’s the equivalent to the oldest trick in the book, but it makes it all the more infuriating that Westminster’s finest are in fear of a party that has shown itself to be a BNP-Lite.  Is it any wonder that a still fairly debatable case for Independence is still running rings around the Westminster parties.  Still, blame the outsider worked for Hitler and for Mussolini in economic times of trouble, maybe Putin’s not the only dubious leader that Farage models himself on?
Posted by Allan at 11:00 No comments:


There are two things consistent about the Independence referendum campaign.  The poll lead for staying in the Union and the constant use by the commentariat that the pro-Independence camp need a “gamechanger”.  This is not something I’ve ever thought, preferring to think of the “yes” camp as badly behind and needing snookers to get back into the campaign.  On the face of it, Nick Watt’s story in Saturday’s Guardian has delivered that desired snooker.

The story goes that a member of the Coalition government - the prime suspect being the person pictured to the right - has essentially said that “Of course, there would be a currency union” in the event of a Yes vote.  Deepthroat went on, speculating that the quid pro quo could well be the SNP’s policy regarding nuclear submarines, currently deployed at the Faslaine base in the Holy Loch – “you can see the outlines of a deal”.  At a stroke, the argument that Better Together have been prosecuting, that there will be no “Sterlingzone”, has been demolished.  What has been worse for Better Together has been attempt to rebut this story from the key figures in Better Together.  The sight of these figures trying to cover up their collapsing policy is akin to cheating husbands being found out.

It seems though that Better Together are suffering from collective wobbles, which seems to have destabilised their campaign.  This incident seems to be the latest and most serious setback to their campaign that really should be straightforward.  The Better Together campaign really should be based around flagging up the holes in “The Salmond Plan” (and there are holes…), consistently referencing & reinforcing the shared tied and cultural identity that we have as part of the UK (or endlessly repeat the opening ceremony from the London Olympics) and also putting forward the Devolution 2.0 proposals (fiscal autonomy) that really should have been put forward five years ago – when we wound up with the pig in a poke that was Calman instead.

Instead Better Together has fallen into the trap of endlessly rubbishing anything that Yes Scotland puts forward, before reading the small print.

Sterlingzone is the ideal example of what has gone wrong with Better Together.  From the outset, Swinney’s proposals had more than the whiff of being a hasty compromise after the Eurozone crisis made adopting the Euro electorally toxic.  Modern currency unions demand an element of there being a sharing of economic & monetary policy – it was the difficulty in this area that Mark Carney flagged up that made Sterlingzone difficult (but not impossible).  Indeed, if anything Carney while not torpedoing Sterlingzone did torpedo the other SNP flagship policy – the lowering of Corporation Tax rates (initially to 3% lower than the r-UK rate).  Yet the response from Better Together was a complete misreading of what Carney actually said.  And this heavy handedness continued.

It could be argued that Better Together’s troubles started with Osborne’s declaration on Sterling. Michael Portillo on the BBC’s This Week programme described Osborne’s speech as “economically correct…  but bad politics”.  The heavy handed declaration that there will be no Sterlingzone has played into the hands of the pro-Indy Yes Scotland, as well as having the effect of backing themselves into a corner.  It has been a gamechanger, but in terms of reinforcing the trend rather than reversing the (at that point) nascent trend.  As I mused on Twitter, I wondered if Darling’s opposition to currency unions extended as far back as when he was Chief Secretary to the Treasury in Blair’s first Cabinet way back when Blair was keen on UK entry to the Euro.

Instead of the heavy handed approach, the UK government might have called Yes Scotland’s bluff and issued their initial negotiating terms regarding Sterlingzone, rather than blunder into the bear trap like a Wookie into an Ewok trap.  Not only has this heavy handedness fundamentally undermined Better Together’s arguments regarding being better together, it has changed and harmed the Union itself.  With Balls quite happy to stand shoulder to shoulder with Osborne & Alexander on Sterlingzone, what other issues (apart from the continuation of Austerity – which Balls has already signed up to) will they find common ground with?  If the heavy handed nature of the dismissal of Sterlingzone does not have critical enough consequences for Better Together, Deepthroat’s revelation has destroyed the credibility of the Better Together parties.  As a (now former) Chancellor once said to his boss, the Prime Minister “How can I ever trust anything you say ever again?”.