Obama 2: The Best Is Yet To Come 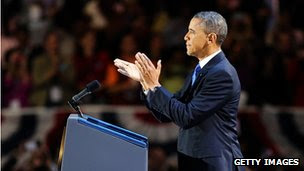 Yet for all of the relief and pleasure at the Obama victory (or is that the Romney defeat) in this country, the thought that Obama really should have won this by a larger margin remains.  The very reason that this election campaign came down to a dog-fight could be summed up in four words.  The first Presidential debate.

I had long thought that Obama should have been heading for a comfortable victory.  Obama’s opponents from the other side of the pond look more than divided – with the advent of the Tea Party wing they look more and more like an American version of the Labour Party from circa 1981.  As a result, the list of candidates for the primaries looked rather like a group of zealots and religious fundamentalists exposing 19th century views.  Even with the election of the most sensible candidate, Romney, Obama really should have won much more comfortably.

Yet, Romney had chipped away at Obama’s achilles heel – the economic performance of the USA in the past four years.  What made this election tighter than it should have been was undoubtedly Obama’s poor performance in the first Presidential debate – in the aftermath Romney’s polling experienced what could be called a “Clegg Bounce”.  It is arguable that Obama’s reaction to Storm Sandy certainly helped Obama recover enough of the ground lost in that debate to see him over the finish line in the same way that Brown’s visit to Rochdale (and all that…) saw the momentum steadily swing towards Cameron in the last General Election.

Obama’s victory already guarantees that certain things will not happen.  The USA will not provoke a trade or economic war with China, or worse.  There will also be no disproportionate response to the antics of Israel or Iran.  However Obama’s legacy really depends on how he deals with the supposed “Fiscal Cliff”.  There are though people looking at the lessons that can be learned & transplanted here.

Nick Robinson lists five lessons in his post yesterday.  His first, “Incumbents Can Still Win” obviously resonates with our own government – though there should be caveats attached.  Since the Second World War, only Ford, Carter and George Bush (senior) have lost as sitting presidents – two terms are the norm.  The much bigger lesson, which is one that has been the case in British politics since Thatcher and was clearly on show here, is that opposition parties need to fashion themselves into a credible alternative government in waiting.  Blair did that, Cameron fell just short of that while Kinnock, Hague & Howard all failed to do this.

The other lesson that resonates in British politics is that negative campaigning works.  “Labour Isn’t Working”, “Labour’s Tax Bombshell” & “You Can’t Trust The Tories on The NHS” are all slogans that spearheaded negative aspects of election winning campaigning.  Sure the negative aspects were always a part of the main campaigns, but in the United States the negative campaign was the main spearhead.  Anyone who doubts that such negative campaigning won’t work here needs to look at the current Scottish Referendum campaign, where the SNP’s pro Independence message has become undermined by opposition attacks not on the main issues but on what are really fringe and just off core issues.

When Obama entered the White House in 2009, the USA was at its most precarious economic position since the 1930’s.  He hasn’t quite turned things around, partially down to the various “Checks and balances” inherent in the USA government machine.  Four more years gives the US time to cement “Obama-care” into the government and should (mid term elections providing) give Obama the chance to become the reforming president he wants to be.  Unfortunately we have 2 years of Obama the Tory to get out of the way first.
Posted by Allan at 14:00 No comments:

Email ThisBlogThis!Share to TwitterShare to FacebookShare to Pinterest
Labels: Election, Obama, President, US

“John Major With An I-Pod”

As wee Dougie Alexander’s described the Prime Minister on GMS yesterday morning in the aftermath of the Government’s defeat in a debate about the EU’s proposed budget.

While I understand why Alexander made the comparison – and it does somewhat hit the spot – a further look at the comparison will show that it doesn’t stack up.  In the 1990’s the Conservatives were genuinely split between supporters of the EU and Eurosceptics – MP’s who initially agreed with Thatcher’s own damascene conversion on the EU, which was outlined in her famous Bruges speech.  As a result the Tory party that John Major led was pretty close to ungovernable, especially given the slender 21 seat majority Major scraped home with in the 1992 Westminster Election.  Nowhere is the dramatic reversal in John Major’s fortunes so evident than in the perception of his biggest achievement after that Election win.

Five months before that election, Major took part in the final round of negotiations which would shape the European Union’s latest treaty.  This treaty was specifically about proposals for a currency union.  From those final negotiations in the Dutch town of Maastricht, Major managed to negotiated an opt out not just of currency union for Britain but also from a series of workers rights known as “The Social Chapter”.  This was hailed at the time as a triumph.  Then came the election that saw Major re-elected but on a much reduced majority.

As a result, Major found it more and more difficult to ratify what was known as the Maastricht Treaty, as a small but vocal minority of Tories aided by John Smith’s Labour Party blocked and frustrated any attempt to get the bill through parliament.  Major managed to get the bill through, but only after tieing the bill to a no confidence vote.  The Eurosceptic genie was out of the bottle.  So why is this different to the circumstances Cameron faces?

For a start, Cameron’s trouble’s are entirely of his own making.  Milliband the younger’s jibe about Flashman strikes as more than a jibe, that there is something there that Cameron believes that he is a much more talented politician than he actually is.  He has cultivated the right of his party in an attempt to keep them onside, despite the fact that the right wing of the Tories hate him – probably for giving up on the Lisbon Treaty.  At the same time Cameron wants to cultivate an image of himself as a pragmatic “One Nation” Tory, despite the fact that the two “images” are completely and utterly incompatible.

Because Cameron has tried to keep onside with the right of his party, he has done things in office which might have appeared to look good to the right but has in reality been executed in a poor fashion.  Most famously, he walked out of last December’s summit because he could not get an opt out from, of all things, more stringent financial regulations.  As I pointed out at the time, neither Brown, Blair, Major or Thatcher would have flounced out of a EU summit at 5am without any quid pro quo.  Then again, and this is probably key, neither of the aforementioned Prime Ministers probably felt that they should have been there and that they were entitled to be there.   Call it work ethic if you want, but i suspect that those four Prime Ministers felt that they had to work at the job and I suspect that Cameron is too lazy at working at his job.

The Government’s defeat, Cameron’s first Common’s defeat as Prime Minister, means that Cameron will now head off to this weekend's EU conference very much between a rock and a hard place.  While most of Cameron’s fellow EU leaders would like to successfully negotiate a real terms freeze (ie rises pegged at inflation) at the very least, our parliament, including the elected SNP MP’s, have voiced displeasure at this and urged a total freeze in the EU’s budget.

While a lot has been said about Labour’s blatant attempt at…  er… politics (Interesting to see Cameron’s comments on the subject, given he spent 4 and a half years attempting to clamber aboard every passing bandwagon), the SNP’s motives here should fall under some scrutiny.  As has been explained previously, the argument has been that I-Scotland would be allowed into the European Union without having to apply.  What I find strange is that all of this assumes that this argument is popular.  Yet a cursory glimpse of the (admittedly Anglocentric) media shows that not only was the defeat popular, but that Milliband the Younger is seriously thinking about outflanking the Tories by promising an in/out referendum in the EU.

On this issue above most, Salmond looks seriously behind the curve, while most of the political establishment at Westminster race to show their Eurosceptic stripes.  At Westminster, Salmond’s own party has failed to see the bigger picture in traipsing through the same lobby as Bill Cash and Peter Bone.  After all, as a proposed country that would be a net-receiver of EU funds, what do you think the SNP’s response would be towards r-UK if this happened in the future?
Posted by Allan at 10:30 No comments: