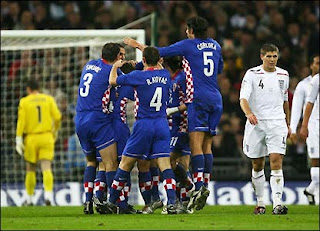 England failed to qualify for Euro 2008 after losing a sensational game against Croatia at Wembley. England went 2-0 down when Scott Carson, in for Paul Robinson, fumbled Nico Kranjcar's shot into the net and then Ivica Olic slipped in a second.
Frank Lampard pulled one back from the spot after Jermain Defoe was fouled, before David Beckham, winning a 99th cap, set up Peter Crouch to level it. But Mladen Petric fired in from 25 yards to break England's hearts.

The result, coupled with Russia's slender 1-0 win over Andorra, means England will not be going to next summer's tournament in Austria and Switzerland.

Quite arguably the game of the year, a result which exposed the hype and hyperbole of the “Golden Generation” for what it really was. Croatia bulldozed and embarrassed their hosts in the first half, playing fantastic, sweet, passing football. It was an emperor’s new clothes moment. Yet the second-half still shows that Croatia still have a bit to go before emulating the class of 1998 with a major semi final. Certain dark horses for next years European Championships.

But enough of the suadenfreude. England in a way, find themselves in the same position that Scotland were in at the start of the Berti Vogt’s era. Top League full of foreign players, which were stifling the progress of young Scottish talent. The collapse in TV revenues in season 2001/02, rather than signal the beginning of the end of the Scottish game as we know it, was a blessing in disguise as the high earning foreign players were released, young talent was pressed into first team action. This is how the likes of McFadden & Pearson (at Motherwell), O’Connor, Riordan and Brown (at Hibernian) and Gordon (at Hearts) got their break.

I’m not saying that something dramatic like that should happen to the English Premiership, which after all was given the FA’s blessing because it was supposed to help the national team, but something is not going right if an English international is being kept out of a Portsmouth side by a Zimbabwean international. That’s Zimbabwe, who are not at the ongoing African Cup of Nations. After all, it wasn’t the halt in importing foreigner footballers per se which cleared the decks for young Scottish players, just the ones who were as good, but not of a significantly better standard than the young Scottish players.

Not that any of this is likely to happen in England any time soon, managers will try and find the best players to fit into their teams, no matter where they come from. It wont stop the likes of Harry Redknapp moan about the timing of the African Cup of Nations, hmmm….

While the shortage in young English talent should be of concern, another area that should cause alarm was highlighted during this campaign. Steve McLarens alarming lack of tactical nous was highlighted almost everywhere up to his sacking the day after this game. Conveniently ignored though was that McLaren was, in effect the leading English front runner for the post when he got the job just before the last World Cup. He was the last Englishman to win a domestic trophy, the League Cup with Middlesbrough in 2004, and took them to the UEFA Cup final before leaving to join the England set up. Perhaps the 4-0 rout by Sevillia in that final was a harbinger of things to come. 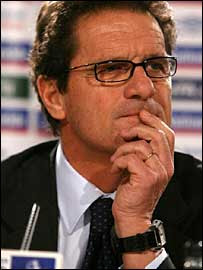 Yet amazingly for a country the size of England, the English championship has been won by teams managed by Englishmen 6 times in the past 25 years (Paisley & Fagin, twice, for Liverpool, Kendall for Everton, twice and Wilkinson for Leeds), while the FA cup has been won twice by teams managed by English managers in the past 20 years (Bobby Gould managing Wimbledon in 1988, and Joe Royle managing Everton in 1995). This lack of English managerial talent is quite endemic. Again, English football has fallen behind even Scotland in this area, the SFA set up coaching courses in the early 1980’s, the chap who set the courses up was a coach by the name of Andy Roxburgh.

Perhaps it’s no surprise that the FA once again went for a foreign manager, this time in the shape of Fabio Capello (right), considering the paucity of suitable candidates. However well the cracks are papered over, English football is at a crossroads. For its own sake, it must consider the future of the national team. Like it was supposed to when the Premier League was set up in 1991.
Posted by Allan at 23:05 No comments: