I’m not exactly sure of the polling but I’d suspect that there is a majority of people who would quite like there not to be another Independence referendum around the corner.  Given this, it is somewhat strange to see Labour recreate last years campaign in the form of their own leadership election. 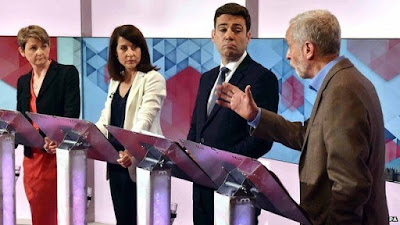 Last time I blogged about the Labour leadership contest, it had just started and Burnham was still the bookies favourite.  We had just had the Newsnight leaders hustings, where we had the harbinger of Burnham tanking, and both Cooper and Kendall treading water against a sensible but ‘suspend disbelief’ credible Jeremy Corbyn.  Since then, Burnham and Cooper are still in the race, Liz Kendall seems to have disappeared completely while Corbyn if the polls are to be believed (yep, I know) is striding towards victory.

If this does happen, the reasons are fairly obvious.  A party that has had enough of it’s leaders buying the economic narrative of their chef opponent’s will have gone for the candidate that least articulates Osborne’s Scorched Earth as the only way.  As for the attacks on Corbyn being unelectable, maybe he is, but that doesn’t mean that Burnham, Cooper and Kendall are any more electable.  Indeed, if Corbyn is elected as Labour leader it will be an admonishment of the Progress wingers by the Labour rank and file – if you speak for the country then why have you provided us with weak, vacillating, vague and unelectable politicians to choose as candidates.

The various interjections from Party “grandees” have been Cameron-esque in the unintentional boosts that have been given to Corbyn. One suspects that the same result will come from Blair’s recent piece – especially as Blair seems to have a blind spot regarding the squeeze from the left that has cost his party votes.  The main reason that Blair’s stock is not high among the left can be found in the comparison with the other PM to have won three elections in a row.  Where Thatcher won and took the country rightwards, Blair won and did not attempt to take the country leftwards – preferring to keep the country in it’s centre right small c conservative mindset.  Wasted opportunities…

There are two other things in Corbyn’s favour.  Firstly there is his readiness to speak the apparently unsayable.  For too long people with left of centre values and ideals have been driven to the sidelines, firstly by a media only too happy to brand socialists as ‘loonies’ and then by a party hierarchy only too happy to pander to those stereotypes.   Secondly, Corbyn does have a plan, a series of alternative policies, policies which pay no relevance to the New Labour/Conservative convergence in economic policy.  It comes back to one of Labour’s failures in May – they simply did not provide a viable alternative to Osborne-omics, Austerity and all that.  Milliband did try and failed to ride the two diverging horses that is the current Labour party with his curious mix of left wing market interventionist policies and acceptance of Osborne-omics.  His reward was a whispering campaign and the treat of a revolt from the Blairistas virtually as soon as the BBC/ITV/Sky News exit poll was released.  Milliband’s successor however is already guaranteed to be less successful if the sound of toys being thrown out of prams is anything to go by.

Whether Corbyn himself is electable is a mute point in itself.  I think he would have to work very hard to convince an electorate which gets its news from a still anti-socialist media (pro-Indy supporters who complained about anti –Independence bias in the media seem to have forgotten the 1980’s when the press were en mass anti Labour.  The S*n being the very definition of pro-Thatcher bias.  Everything the BBC quite resolutely was not).  The circumstances against Corbyn becoming PM are even more stacked against him than they would be against say Liz Kendall, and that’s before we talk about his policies (which would quite possibly be his strongest point).  Those ideas and debates, which Labour would need to have with the country and it’s own members, would be obscured by a hostile media that would do everything to egg on the Progress Groupers.  The wing of the party that will be even more desperate for Corbyn to fail than they were for Ed Milliband to fail.

We’ve already seen Blair speak of Corbyn supporters as being in need of heart transplants and his policies likened to “Alice in Wonderland politics” as well as the various torrents of abuse rained down on Corbynistas by Blair and his supporters.  Maybe there are armies of Cybernat style keyboard warriors trolling members of the Progress wing of Labour, from the view of the air war there is only one side loosing it.  A Corbyn win and no bookie in the land would take a bet on Labour splitting, with the Progress group favorites to throw their collective toys out of the pram.

While the Progress wingers are busily going about their collective temper tantrums, perhaps they should spare a thought as to why not one of their candidates has the talent and wherewithal to unite the Labour party without recourse to a ‘stairheid rammy’ (© Bernard Ponsonby).  Before the campaign, I’d have thought that Yvette Cooper would have had a decent chance of winning.  More so given that the mandarins and civil servants in Whitehall thought very highly of her.  Instead, she has tried to out Kendall Liz Kendall and not really sought to entice left wing voters beyond the Project Fear-esque scare stories.  At least Burnham has tried to adopt a bid tent approach to politics by not ruling out shadow cabinet positions for either Corbyn or Ed Milliband, even though his campaign hasn’t been very good.

At the moment, there is only one candidate with ideas and policies. That person is the favorite and has spooked the Labour establishment so much that they now look guilty of attempting to gerrymander the Labour leadership election.  Whether Corbyn wins or not, Labour has somehow found itself in an even bigger hole than it was in on the morning of 8 May.  Labour is in dire need of a figure that can gain the support from all sides of their party, and on the current showing none of the candidates are showing the crucial ability to square the rapidly diverging priorities of middle England and the Scottish central belt.
Posted by Allan at 12:00 No comments:


I’ve been doing this blog now for over 8 years.  As the risk of coming across all  ‘it were all fields here when I were a lad’ and all that, I can remember quite a few of the bloggers from when I started.  One of them in particular never really struck me as future leadership material.  Then again, like with Nicola Sturgeon, I wasn’t looking for signs of leadership potential with Kezia Dugdale.

That’s not to say that she’s not leadership material.  The problem I have is that it’s just too early in her career for her to be landed with such a huge job.  Strike that, it’s a massive job with the near certain guarantee that her party will be defeated again in next May’s Holyrood elections. In essence, Dugdale’s task for next May is to halt her party’s decline and maybe get her party into the position where Bute House is a realistic shot come 2019 (or whenever the next but one Holyrood election will be).  To do that, they need to put pressure on the SNP Government.

Under Murphy, they’d started to do that.  Though why they ran a Holyrood campaign for a Westminster election will be lost on everyone…  unless Murphy tells all in his memoirs.  They’d flagged up the SNP’s record with waiting times at my local hospital, forgetting that the RAH was poorly run when Labour were in charge of…  it wasn’t government at that point, was it? They’ve flagged up the labyrinthine replacements for Standard Grades & Highers as well as the falling standards.

Of course, none of this will work without viable policies.  It’s this which Scottish Labour have dramatically failed at for the past three elections, which explains the relentlessly negative attacks on the SNP.  Given the tack hinted at with their attacks on how the SNP have ran public services, perhaps they should pitch for the modernisation of those public services.  After all, the SNP have been remarkably conservative when it has come to the running of those public services.  Reorganisation of the moribund Health Boards might be a flier, while policies aimed at driving up numeracy & literacy rates could well be eye-catching.  If Dugdale was feeling really bold and radical, she could pledge to replace the Council Tax.  A move that would instantly put the SNP on the back foot – given it was one of their policy pledges in 2007.

The early days, indeed conceivably whether she lasts beyond next May’s election, probably depends on the outcome of the main UK wide leadership election.  With this in mind, Dugdale should press for more autonomy for the Scottish party.  To date, we do not know the leadership’s honest opinion of the conduct of Scottish Labour since…  well probably since the SNP retained power in 2011.  Certainly the seeds of their behaviour goes back that far, Scottish Labour’s decline goes further.  If Dugdale pushed for more autonomy, it will give her more leeway to push for…  ah… “Scottish solutions for Scottish issues”.  Policies that might not sit well with Cooper or Burnham, let alone Corbyn or Kendall.  Conversely, a degree of autonomy might insulate Dugdale from any further fallout from the UK-wide leadership election.

The only certainties about Dugdale’s election to the leadership of “Scottish” Labour is that she faces an uphill battle to even stand still from 2011 and that her fate is not fully in her own hands.  Outside of the party line, no one really knows what she stands for.  In this respect, the comparison is not with her immediate opponent, Nicola Sturgeon, but with the two most recent Conservative Prime Ministers.  David Cameron became leader of the Conservatives five years after his entry to the House of Commons, the fastest rise to leadership of the two main parties since the war.  Hug a Hoodie, Compassionate Conservatism and Vote Blue, Go Green were his early slogans, but we really had to wait until the 2010 election campaign to get Cameron.

John Major’s rise might have been comparatively slow, entering parliament in 1979 and appointed to cabinet in the aftermath of the 1987 election win followed by being appointed Foreign Secretary and Chancellor in the 18 months before the fall of Thatcher, yet the perception was of Major being a Thatcher placeman, rather than the harbinger of Blairite New Labour-ism (in terms of policy, rather than presentation) that he became.  Dugdale entered Holyrood in 2011, we are not even at the end of her first full term at Holyrood.  Granted, that rise is nowhere near as rapid as Ruth Davidson’s rise.

It’s not inconceivable that Dugdale could end up being the next First Minister in 282 or so days time, it’s just highly unlikely.  Given the huge hole “Scottish” Labour finds itself in, handing the keys to the car to the youngest candidate available has the potential to be a recipe for disaster.  If “Scottish” Labour want to get out of the mess they find themselves in, they must ignore the almost certain defeat heading their way come next May.  For them, the planning for 2019 begins now.
Posted by Allan at 13:00 No comments: